PLEASE NOTE: All itineraries are for guidance only. Programs may vary depending on local ice, weather, and wildlife conditions. The on-board expedition leader will determine the final itinerary. Flexibility is paramount for expedition cruises. Average cruising speed for m/v Plancius is 10,5 knots. 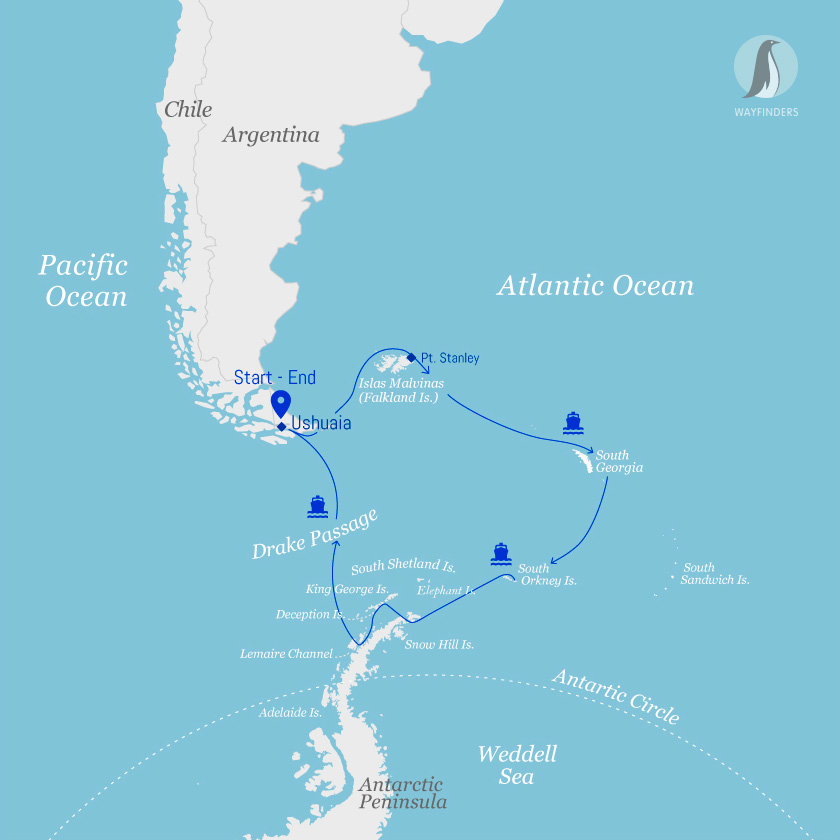 PLEASE NOTE: All itineraries are for guidance only. Programs may vary depending on local ice, weather, and wildlife conditions. The on-board expedition leader will determine the final itinerary. Flexibility is paramount for expedition cruises. Average cruising speed for m/v Plancius is 10,5 knots.

Day 1 – We embark our vessel in Ushuaia
In the afternoon, we embark in Ushuaia, Tierra del Fuego, Argentina, the southernmost city in the world located at the Beagle Channel and sail through this scenic waterway for the rest of the evening.

Day 2 – At sea, en-route to the Falkland Islands (Malvinas)
At sea, in the westerlies the ship is followed by several species of albatrosses, storm petrels, shearwaters and diving petrels.

Day 3 – On the Falkland Islands (Malvinas)
In the Falkland Islands (Malvinas) we plan to spend the whole day on the fascinating western side of the archipelago. A hike along the Shore of Carcass Island will give us views of Magellanic and Gentoo-Penguins, as well as close encounters with water fowl and Night herons and passerines. On Saunders we will be able to observe four species of breeding penguins (Gentoo, King, Magellanic and Rockhopper), Black-browed Albatrosses and King Cormorants.

Day 4 – Port Stanley
The capital of the Falklands, Port Stanley has some South American traits mixed in with a little Victorian charm: colorful houses, well-tended gardens, and English-style pubs. You can see several century-old clipper ships in the surrounding area, silent witnesses to the hardships of 19th century sailors. The small but interesting museum is also worth a visit, covering the early days of the settlement up to the Falkland War. Approximately 2,100 people live in the capital, where you are free to wander at will – though admission fees to local attractions are not included.

Days 5 and 6 – On our way to South Georgia
En route to South Georgia, you cross the Antarctic Convergence. The temperature cools considerably within only a few hours, and nutritious water rises to the surface of the sea due to colliding water columns. This phenomenon attracts a multitude of seabirds near the ship: several species of albatrosses as well as shearwaters, petrels, prions, and skuas.

Days 7 to 10 – South Georgia
In the early afternoon of day 7 we arrive at our first landing site in South Georgia. We might visit the bay of Elsehul, with its very active fur seal breeding beach, and then set course to Right Whale Bay, Salisbury Plain, Godthul, St. Andrews Bay, Gold Harbour, Cooper Bay and Drygalski Fjord to give you a good opportunity to see a wide spectrum of landscapes and wildlife, like the Elephant seals, Fur seals, King and Macaroni Penguins.One of the highlights might be our visit to Prion Island, where we will witness the breeding efforts of the huge Wandering Albatross and enjoy watching their displays (the island is closed for visitors during breeding season from 20 Nov – 07 January). At Fortuna Bay we might try to follow in the footsteps of the great British Explorer Ernest Shackleton and hike over to Stromness Bay. There and at Grytviken we’ll see an abandoned whaling village, where King Penguins now walk in the streets and seals have taken over the buildings. At Grytviken we’ll also offer a visit to the Whaling History Museum as well as to Shackleton´s grave nearby. We will depart from South Georgia in the afternoon of day 10.

Day 11 – At sea
Where the ship is again followed by a multitude of seabirds. At some point we might encounter sea-ice, and it is at the ice-edge where we might have a chance to see some high-Antarctic species like the South Polar Skua and Snow Petrel.

Day 12 – South Orkney Islands, we plan a visit to Orcadas station
We are planning on a visit to Orcadas station, an Argentinean base located on Laurie Island in the South Orkney Island archipelago. The friendly base personnel will show us their facilities and we can enjoy the wonderful views of the surrounding glaciers. Alternatively we may attempt a landing in Shingle Cove on Signy Island.

Day 13 – At sea towards Antarctica
We will pass large icebergs and have a good chance of Fin whales on the way south. Also we have the best chances on the trip to see Antarctic Petrels around the ship.

Days 14 to 17 – Antarctic Peninsula
If the ice permits we will sail into the Weddell Sea through the ice-clogged Antarctic Sound. Huge tabular icebergs will announce our arrival to the eastern side of the Antarctic Peninsula. We plan to visit Paulet Island with a huge number of Adélie penguins and Brown Bluff where we may set foot on the Continent. In good sailing conditions we may decide to extend our time in the Weddell Sea. The volcanic islands of the South Shetlands are windswept and often shrouded in mist, but do offer subtle pleasures. There is a nice variety of flora (mosses, lichens and flowering grasses) and fauna, such as Gentoo Penguins, Chinstrap Penguins and Southern Giant Petrels. On Half Moon Island we will find Chinstrap Penguins and Weddell Seals often haul out on the beach near the Argentinean station Camara.In Deception Island our ship braves into the entrance of the crater through the spectacular Neptune’s Bellows. Deception itself is a sub-ducted crater which opens into the sea creating a natural harbour for the ship. Here we find hot springs, an abandoned whaling station, thousands of Cape Petrels and many Kelp Gulls, Brown and South Polar Skuas and Antarctic Terns. Wilson’s Storm Petrels and Black-bellied Storm Petrels nest in the ruins of the whaling station in Whalers Bay.

Days 18 and 19 – At sea en-route to Ushuaia
On our way north we are again followed by a great selection of seabirds while crossing the Drake Passage.

Day 20 – We disembark our vessel in Ushuaia
We arrive in the morning in Ushuaia and disembark.